Technology from Renishaw is helping HiETA to move metal additive manufacturing (AM) from prototype manufacture into commercial production of its specialist range of heat exchangers. In particular, the recent addition of Renishaw's RenAM 500M system at the company has enabled manufacturing times and, therefore production costs, to be reduced dramatically.

The RenAM 500M is a laser powder-bed fusion additive manufacturing system designed specifically for the production of metal components on the factory floor. As well as incorporating a powerful 500 W laser to give faster processing than earlier models, the new equipment features an automated powder handling system that enables more consistent process quality and reduced operator time on the machine.

HiETA was founded in 2011 to develop metal AM methods for the production of complex, light-weight structures for various types of heat-management applications. Parts manufactured include recuperators, turbo-machinery and combustion components for micro gas-turbines, phase- change heat exchangers for fuel cells and integrated waste- heat recovery systems, and components for highly-efficient internal combustion engines, including turbo-machinery and sections for handling exhaust gases.

Stephen Mellor, now Lead Project Engineer at HiETA, became the company's first employee after an approach by the directors, who had registered some patents on using additive technologies to produce heat exchangers. He had first become involved with AM while studying engineering at Exeter University, UK and, subsequently, specialised in research on the technology for his PhD. HiETA now has more than twenty-five staff and an impressive range of facilities that can together cover the whole AM product development process, starting with a review of the customer's requirements, and then moving from an initial design through to computational fluid dynamics (CFD) and finite-element analysis (FEA), manufacturing with the Renishaw equipment, testing and validation.

Traditionally, heat exchange products are often made up from thin sheets of material that are welded together. The complexity of the designs makes production both challenging and time-consuming, while the material used for the welding process adds to the overall weight of the part. Prior to the work at HiETA, little research had been undertaken into the use of AM for the manufacture of heat exchangers. The initial challenges were, therefore, to confirm that AM could successfully generate sufficiently thin walls of the required quality and, then, to produce a complete component with the complexity of a typical heat exchanger.

The third challenge was to use the knowledge and experience developed to move the process from the manufacture of samples and prototypes into low-volume production.

Through our partnership with Renishaw, we have produced components that are typically around 40% lighter and smaller by volume than anything equivalent that is available on the market. With the Renishaw technology, we can design and manufacture many novel and high performing surfaces integrated into a single component. This would be very difficult to do with conventional methods.

HiETA chose to partner with Renishaw and to use Renishaw's AM250 system across a range of projects. Firstly, HiETA worked closely with Renishaw to develop specific parameter sets for the production of leak-free thin walls in Inconel down to thicknesses of 150 microns. Both companies produced samples using a variety of settings on the AM250 at Renishaw's facility in Stone, Staffordshire and the system at HiETA's base on the Bristol and Bath Science Park near Bristol, UK. The resulting samples were heat treated and then characterised at HiETA and Renishaw. The test results enabled the companies to confirm the optimum parameters on the machines for thin-walled structures and also allowed HiETA to develop a design guidebook with parameters for heat transfer in heat exchangers manufactured using laser powder- bed fusion technology. Having achieved a leak-free integral wall, the next stage was to move to a complete, full-size unit, which could be completed in a reasonable build time. Two projects were undertaken, both with the participation of UK-based vehicle integrator Delta Motorsports, in Silverstone. The first was a cuboid heat exchanger (recuperator) to be used as a range- extender for electric vehicles. The second aimed to take the design of the components to higher levels of complexity beyond the traditional cuboid shape. More complex shapes can improve product performance and cycle efficiency, give benefits in packaging, and reduce costs. The design chosen for this stage was a recuperator of annular form that could be wrapped around other components and contain integrated manifolds to give a more compact overall system. As well as allowing further optimisation of the Renishaw equipment to handle the larger samples, HiETA used these projects to develop an extraction process for removal of excess powder material from the cores of the heat exchangers. 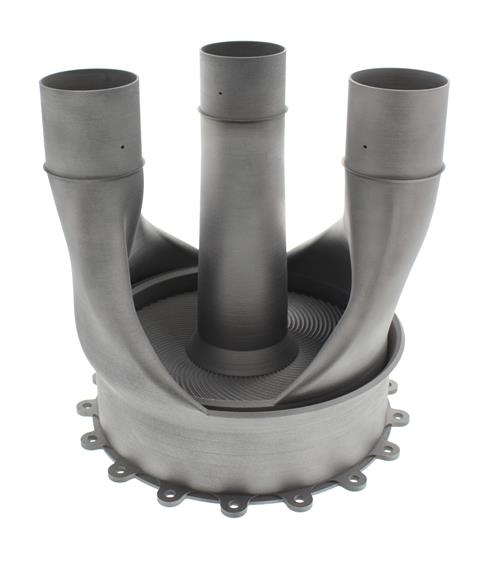 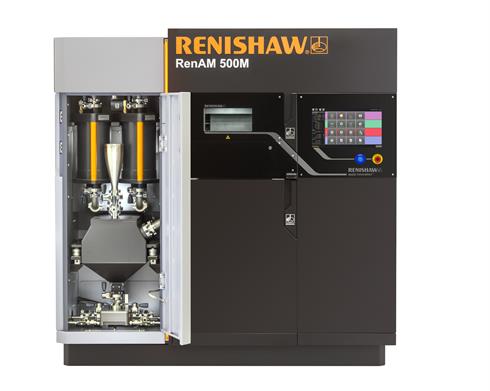 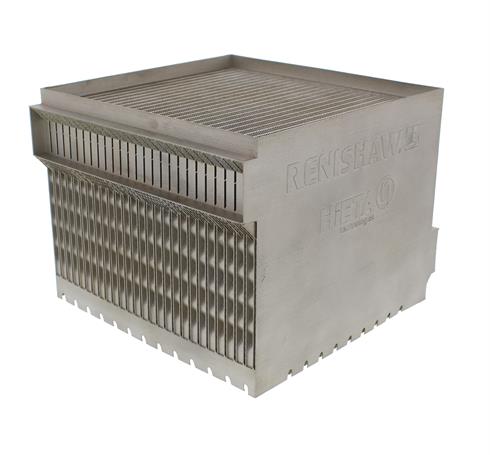 The first result of the partnership between HiETA and Renishaw was to produce the basic data needed to set up the AM equipment to produce thin-walled structures successfully and to provide the parameters needed to predict the performance of heat exchangers manufactured with the Renishaw equipment.

The thermal transfer and fluid flow data that resulted has been incorporated into the CFD and finite-element analysis programs used by HiETA. These programs can be used for an initial assessment of the likely performance of new component designs and thus confirm that the proposals have the potential to meet the customer's requirements.

At the same time, Renishaw has added software improvements, both to facilitate processing of the large amounts of data when the complete recuperator is sliced into thin layers and to create the build instructions needed for the complete part.

The first attempt at making a complete product on the AM250 system generated a successful component but needed a build time of seventeen days. Following improvements to the hardware and software, together with optimisation of the process parameters, this was reduced to eighty hours. Detailed testing showed that the component would meet the requirements in terms of pressure drop and heat transfer.

However, this performance was achieved with a weight and volume approximately 30% lower that an equivalent part made by conventional methods.

“With almost all of our projects, we are trying to light-weight components and solve thermal management issues,” explained Stephen Mellor. “Through our partnership with Renishaw, we have produced components that are typically around 40% lighter and smaller by volume than anything equivalent that is available on the market. This is possible because, with the Renishaw technology, we can design and manufacture many novel and high performing surfaces integrated into a single component. This would be very difficult to do with conventional methods.”

Following the success with the Renishaw AM250, HiETA invested in the more powerful RenAM 500M system to enable more cost-effective production of commercial components in low volumes. “We are now producing parts for engines with real commercial applications and for customers with very demanding requirements,” he continued. “We use Renishaw's AM technology to produce very complex parts that give high performance at competitive prices.” 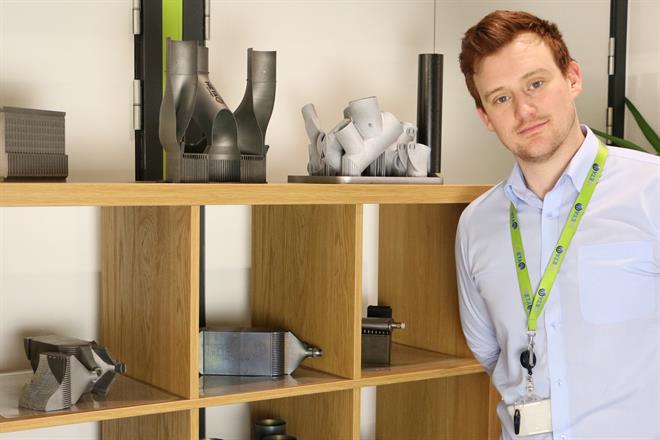 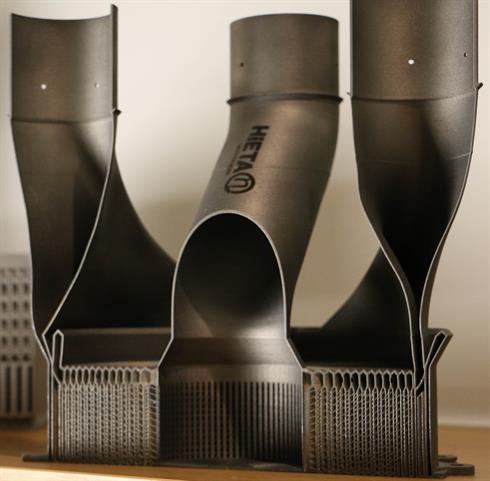